Testing of electronic equipment for railway use and subway

Sicom Testing is a recognized benchmark for the companies that operate, or that are emerging, in the fields of trains and subways. The laboratory is qualified by RINA for the execution of tests on systems for signaling, communication and control in the railway field and for the execution of environmental tests according to the standard EN 50155.

Sicom Testing assists companies that develop projects in the railway sector and want to achieve full compliance with the European Directive 2008/57/CE on the interoperability of the rail system within the community,
Italy has transposed this provision with D.lgs-n. 191/2010 and by the standards EIRENE.

The laboratory performs tests on cellular communication systems used in the railway sector also in band GSM-R for voice and data transmission.

Over the years, Sicom Testing has developed special tests with radio communications simulation for speeds up to 500 km / h with which we have been tested many products targeted for high-speed rail vehicles.

The service is dedicated to producers, importers and distributors of electronic and communication devices installed on board of railway vehicles, trams, high-speed trains and metros.

The list of standards applied by Sicom Testing for railway equipment also includes:

The tests performed
Include: 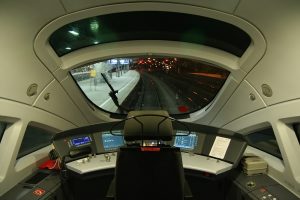 To perform the tests, They are applied to the following technical standards: