RFID technology (Radio-Frequency Identification) It plays a key role in many different areas, acting as a fruitful alternative to bar codes and magnetic stripe cards. The application advantages are many, which they include the ability to read - multiple and contemporary – of untargeted tag, the constant updating of data tracked by the management system and the excellent flexibility of the devices that are highly customizable, as well as non-duplicable.

Among the many worthy aspects that characterize this technology, the need for electrical power It can be seen as a limit. It's’ just to cross this limit that researchers Massachusetts Institute of Technology (WITH) They have designed a type of RFID tag powered by the light, thanks to the use of photovoltaic cells perovskite.

THE SOLUTION OF THE MIT

At present the IoT sensors - and therefore the RFID tag – require batteries that need to be replaced or recharged periodically, factor that can be problematic for monitoring long-term. The RFID tag with photovoltaic system, instead, They could transmit data for years before needing to be maintained or replaced.

The project consists of thin-film solar cells made of perovskite – grafted on active radio frequency identification tag – that they are extremely flexible, Transparent, easy to manufacture and efficient as to supply the same tag.

A culmination of the value of this technology, the cells are capable of powering the sensors both in bright sunlight conditions that in situations characterized by artificial light, in closed environments. The perovskite used – as confirmed by Ian Mathews, one of the study authors – indeed, It can be optimized to collect energy from any type of indoor and outdoor lighting, thanks to its "tremendous potential absorption of light from indoor".

Moreover, the research team has shown that the RFID tag thus created are able to cover more of data transmission distances and allowing the ability to integrate multiple sensors on a single tag, thanks to the increase of power supplied by solar energy. 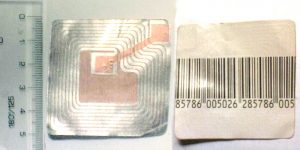 The advantages of RFID devices made with cells in various areas perovskite. First of all the environmental, It sees this technology stem the consumption - and therefore the disposal - of drums, contingentando pollution produced by their use. And if a functional level improvements are guaranteed - with, just, increased coverage and power - from the production side it also gives a substantial economic saving.

As it is known, RFID technology is in itself a low-cost technology. A common feature in the perovskite, a high productivity economical material, which it has proven to be able to convert, efficiently, large quantities of solar energy it receives into electricity.

In the last few years, the performance of the perovskite in solar cells have attracted the attention of researchers and manufacturers, becoming protagonists of studies and experiments. Distancing - thus – from traditional solar cells, more cumbersome and expensive to manufacture, and overcoming, in good part, the other thin-film solar cell technologies studied for decades.

The particular combination of RFID technology and perovskite,therefore, It could count on a good spread and availability of components - all at very low cost - that would make easily accessible and short time scale.

Large-scale production also allows the costs of the path to be easily absorbed Testing of radio equipment which also applies to these devices.

THE VALUE OF A LIGHT ENVIRONMENTAL IOT

As RFID technology (Radio-Frequency Identification) confirms its top position among the IoT resources in areas such as access control, logistics, security and whatnot, a technological innovation such as photovoltaic active tags could revolutionize the consumer - and performance - in many cases and sectors.

Needless to say - to better understand the scope and value of this solution - you can expand the conversation to all the devices of the Internet of Things. Over the next five years, indeed, experts estimate that the number of IoT devices could reach 75 billion worldwide.

Devices that, the current state of affairs, would entail a proportional use - as well as maintenance, charging and disposal - batteries, defining an IoT anything but sustainable.

For reasons, IoT various devices and networks without battery were designed and tested by a number of teams. Two of more frequent limitations among these solutions they are in the stochastic energy collection and accumulation of the same in small capacity; factors that force us to rethink the paradigm of IoT devices such as continuously working.

To date, with the experimentation of IoT devices solar cells perovskite, These problems appear to have been dammed or, least, contained in a satisfactory manner. To carry out this experimental technology and make them have a substantial impact sull'IoT - say the authors of the MIT - expects a substantial commitment to the development of RFID circuits with detection capabilities, as well as lead removal by perovskite cells, on a full key environmental sustainability.

For the Certification of radio equipment, even in cases where the opportunities of new technologies and innovative solutions are exploited, it is essential to be supported by expert figures in the sector such as Sicom Testing right from the preliminary stages.