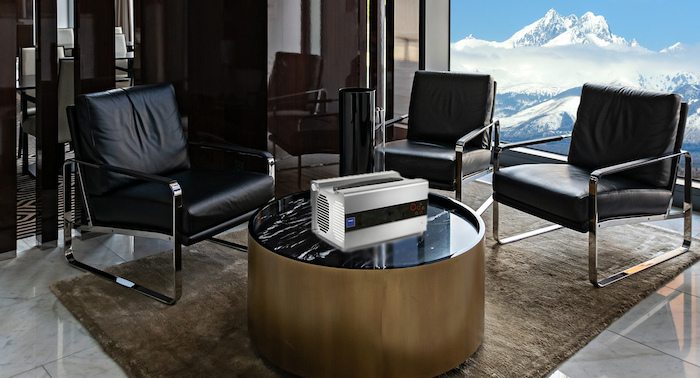 The sanitation and disinfection of public environments, private and means of transport are among the most sought-after methods of containment of’sanitary emergency derived from the spread of COVID-19. The scenario of the most used technologies sees the primacy of those based on ozonation, ionization, photocatalysis, filtering that are essential to reduce the transmission of the virus in an effective and persistent way.

As known, ozone is a hyperoxidizing gas capable of effectively eliminating microorganisms such as bacteria, virus, molds, spore, mushrooms, acari, especially when used to saturate confined spaces. It is a gas that cannot be stored or transported due to its high reactivity, but it is generated in situ from air, oxygen or water.

The most common ozone production method – and which has more advantages – is thecorona effect. This process involves a stream of dry air - or, more simply, of oxygen – is passed through by a high-voltage electrical discharge that breaks the stable oxygen molecule, giving rise to the ozone formation process. Another production process - albeit less advantageous than the previous one – provides ultraviolet lamps with emission band concentrated on 185 Nm. The limitations of this system are higher power consumption, a lower ozone productivity e, in ultimo, the short operating life of the lamps, with the elements connected to the resulting pollution. A third possible process, finally, is the one aimed at the production of ozone to be used in aqueous solution that starts fromelectrolysis of water. Once produced, according to the most convenient process, ozone is a broad spectrum germicide, thanks to the ability to attack and destroy the cell membrane, producing itself in the lysis.

In terms of environmental sanitation, the use of ozone develops following courses of treatment precise, composed of various phases, as reported in “ISS COVID-19 Report No.. 56/2020” produced by ISS and INAIL. The stages that mark a treatment cycle start from the conditioning phase, in which ozone begins to be delivered in the room to be treated, saturating the environment with the concentration suitable for the reference objective. Thus follows the real action phase of ozone which, with doors and windows closed for the necessary time, guarantees the sanitizing action. The cycle ends with the phase of elimination of residual ozone; a phase of great importance for the safety of the occupants of the site where the cycle is located. When the generator is turned off, the concentration of ozone gradually decreases due to the spontaneous conversion of ozone into oxygen. 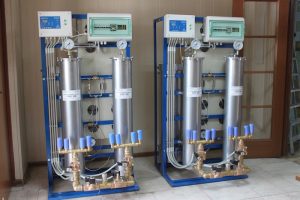 ADVANTAGES IN THE USE OF OZONE

The use of ozone, and therefore of the ozonizers, has numerous benefits. In the first place, the gaseous nature of this disinfection system makes it possible to reach even the most complex surfaces and the least accessible points of an environment. In support of this high degree of effectiveness, costs are very low for each sterilization cycle – there is no need for particular manpower, nor routine maintenance – and the timing of action is extremely short.

Don't forget, Furthermore, that in its production process it is not necessary to use any chemical product, but only of air and electricity. Carried out in correct ways, the virus culling process, batteri, molds and yeasts with ozone does not produce organic or inorganic residues: l’ozono, obtained with technology and appropriate systems, once its cycle is finished it turns back into oxygen without leaving traces unlike other chemical products. In these terms, this technology reduces emissions of harmful substances for the environment, presenting itself as a system that combines efficiency, economy and attention to the environment.

OZONIZERS AND SAFETY, BETWEEN PROCEDURES AND TECHNOLOGIES

Variable of fundamental importance, the precursor of ozone in the production process it can be - and is what happens in most cases – ambient air or pure oxygen > 95% deriving from cylinders or portable concentrators. As defined by the ISS, this is the gap that delineates the possible production of harmful substances or, on the contrary, the absence of toxic waste.

Although the use of oxygen present in the ambient air is simple and economical, it can lead to the production of harmful substances, mainly nitrogen products, in relation to the type of ozone cell and its operating modes. "The use of closed cell generators, instead of generators that use surface plate corona discharge, offers fundamental quality and durability advantages – we read in the COVID-19 Report n. 56/2020 – and the air that feeds the cell must be purified and dehydrated. It is necessary, indeed, that the generators are equipped with a special filtration system of the ambient air source in order to retain any possible contaminants present and avoid or limit the generation of reaction by-products harmful to the human body ".

With the use of an ozone cell powered by purity oxygen > 95% yes you have, instead, the certainty of not generating secondary pollutants, but also the possibility of reaching higher yields and concentrations of ozone in the flow supplied, although it is more complex and expensive equipment. Both in one case and in the other, the user manual provided by the manufacturer must highlight the risks due to the production of harmful substances or the generation of heat / fires, as well as prevention strategies.

Of course the equipment, as electrical devices, they must also pass the electrical safety testing, performed according to a harmonized standard of the LVD directive 2014/35 / EU, as well as evidence of compatibilità elettromagnetica.

OZONE AND THE REGULATORY ASPECT

Already validated in 2001 by the US FDA (Food and Drug Administration) as safe and effective in food processing, ozone was introduced in Europe in 2003 for disinfection and sterilization during thebottling of water. On that occasion the possibility was defined of separating the components of natural mineral waters and spring waters through "an ozone enriched air treatment", as reported in the directive 80/ 777/EEC modified. In Italy, instead, the Ministry of Health recognized – with the protocol of 31 July 1996 n°24482 – the use of ozone in the treatment of air and water, as a natural defense for the sterilization of environments contaminated with bacteria, virus, spore, molds and mites.

For the CE certification of products all the tests indicated in suitable harmonized standards for the electrical safety verification and compatibilità elettromagnetica. The manufacturer or importer can perform them independently if they are equipped with the necessary tools and skills, or entrust them to specialized external laboratories.