The era of telecommunications has made great strides in the technological evolution of mobile networks has allowed the emergence of new devices and new services.
The 3G It opened the doors to the Internet and new multimedia services accessible by mobile phone network; the 4G He has just started to spread on our smartphones and tablets, but there is already talk of the next generation, the 5G, technology that will allow us to develop digital services unthinkable until now.
Indications of future developments, near and far, that for some time they will go to support the 2G and 3G generations that preceded them. But how they have changed the mobile telecommunications generations in years? What result in the introduction of the 5G? 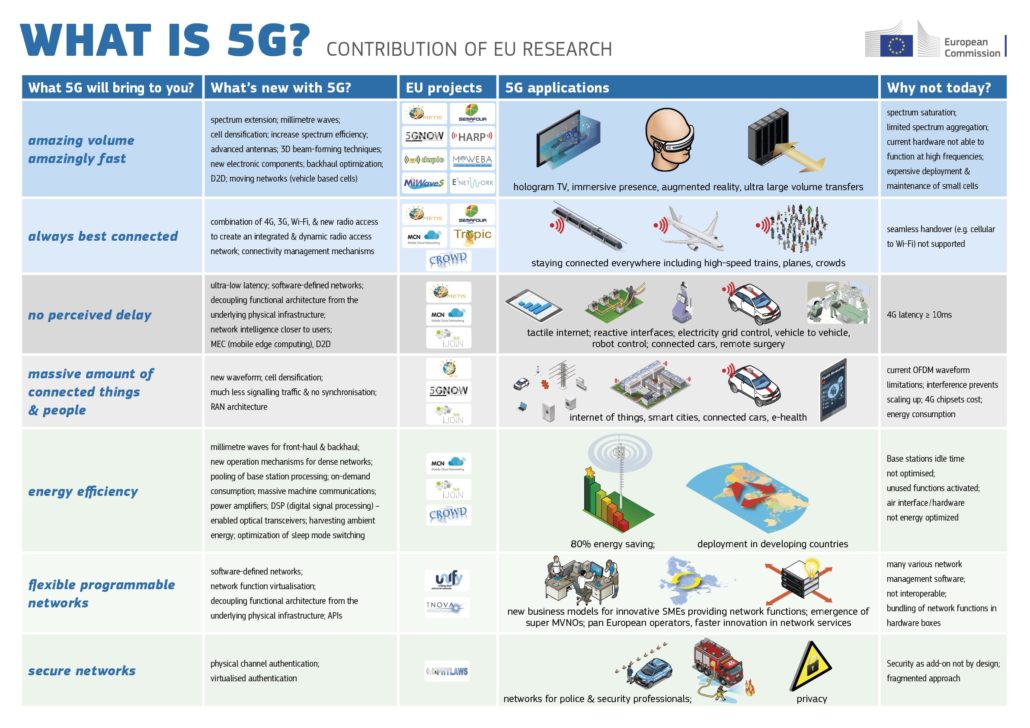 From 1G to 4G: past and present of the mobile telecommunication

Mobile communication has evolved a great deal in a few decades, where generations have passed through the various devices and networks compatible with the new telecommunications standard.
First-generation systems, appeared in the 80s under the name 1G, They transmitted in analog mode and were only able to handle voice traffic.
The quality of communication offered by first generation mobile phones, very bulky equipment, had obvious limitations related to the type of signal, such as poor sound quality and frequent interruptions.

In order to improve the transmission quality, the system capacity and coverage of the signal, the second generation of mobile networks 2G It scored a breaking point with the previous technology, aiming all the digital shift introduced by the GSM standard (Global System for Mobile communications). 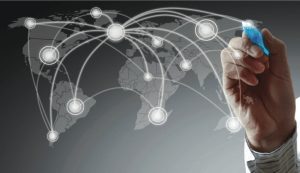 He born in Europe in the early 90s, to date the GSM, implemented by its subsequent evolutions, stands as the mobile phone standard with the largest number of users worldwide.
The use of digital technology has sanctioned the birth of the first data transmission services, in the form of text messages SMS (Short Message Service), multimedia messages MMS (Multimedia Message Service) and WAP (Wireless Application Protocol), the standard that allowed access to specific Internet content from a mobile phone.
All this was made possible by the evolution of the GSM standard, generation 2.5G, a middle way between the second and the third generation GSM UMTS.
GPRS (General Packet Radio Service) first, followed by EDGE technology (Enhanced Data rates for Global Evolution), They have allowed an increase in the connection speed based on a new packet-switched data transmission system. 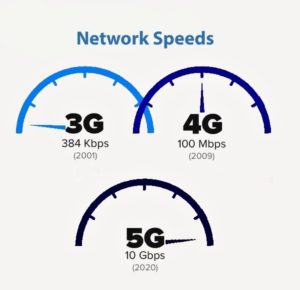 The third-generation technologies are being launched around the world in the early 2000; the new international standard for 3G mobile telephony follow technical specifications defined by the ITU IMT-2000, the International Telecommunication Union, setting as its objective the realization of global system for mobile communication for global roaming terminal. Between these, it standard UMTS (Universal Mobile Telecommunications System), still present and the most widely used in Europe, It is also an evolution of the GSM. The introduction of the protocollo W-CDMA (Wideband Code Division Multiple Access), a particular technology for multiple access to the radio channel for third generation cellular networks, It has allowed the UMTS standard to offer a further acceleration of data transfer. The performance of UMTS, improved use of transmission protocols HSPA (High Speed Packet Access) They have favored the expansion and increased quality of multimedia services accessible to mobile network, allowing for example to maintain smooth video calls and surf the Internet being able to access the desktop version of websites.

4G acronym identifies the Quarta, and present, generation mobile services. The LTE (Long Term Evolution), and its most recent evolution LTE Advanced (LTE-A), They were developed in the late 2000 to increase performance of the 4G mobile networks, sending and receiving data at a speed of connection that can compete with the speed of domestic connections. 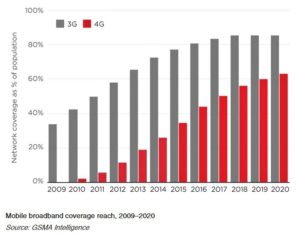 Thanks to an ever-increasing network coverage and the increase of devices capable of supporting it, more and more smartphones and tablets can navigate and access the cloud, streaming services and video conferencing in high definition without slowdowns or interruptions, It made possible by the faster access and reduced latency achieved by 4G networks.

Telecommunication Operators and industry experts are already engaged in the research and development of 5G, the technological infrastructure that can further enhance the speed of the existing data network to support the growing number of users and services accessible by mobile network.
The International Telecommunication Union is beginning to outline the guidelines IMT-2020 It will be based on the new 5G standards, thanks to which we can navigate from smartphones and tablets to a theoretical maximum speed of 20 Gbps, as far as 20 times faster than the maximum speed for the theorized 4G (1 Gbps).
The new generation of mobile technology, which according to ITU forecasts could begin to be available from 2020, in addition to offering higher speed with very low latency, You will be able to connect a large number of devices per sq km and maintain a connection even traveling at very high speeds.
The 5G will provide more and better services for communication, will improve performance in gaming and augmented reality, will also allow to better develop the so-called "Internet of Things (IoT)”: more and more devices, from wearable devices to various common objects with electronic identity, They will be able to communicate on the network and be remotely controllable.